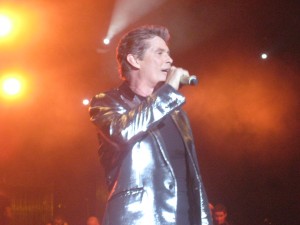 When my brother Achim told me about launching this awesome page to meet his Hoffness and having the chance to throw an eye on the final outcome I went totally mad! What high quality writing combined with essential facts that I would consider general knowledge!

When he asked me then to drop a few lines about Knight Rider I felt honored like I never felt honored in my life before…well, I have to excuse myself bro for letting myself such a long time before hitting the keyboard but I was and I am still overwhelmed about the fact that I am the first one after him to write about this TV series on this magnificent page that influenced my further existence on this planet that I just was not able to concentrate myself enough for writing. Now I am.

What shall I say about Knight Rider that hasn’t been said before… I am one under estimated at least 250 million youngsters back in the 80′s theirs childhood had been under complete control of Michael Knight and his smart, talking car. To say some words about myself: I am called Nikolai and I am the big brother of Achim, I am 31 years old and living in Munich. Everybody’s is always complaining about their age after reaching the age of 30 but hey- If you would not have that age (more or less) you would never have been able to feel that magic that was spread through TV back in the days when the series was first shown on TV!

Still today, watching Michael Knight and KITT fighting for peace and justice confirms my opinion that this is just the best TV series that has ever been produced and ever will be produced. To give you an impression on how much it influenced and obviously obsessed me I give you an idea: In 1990, me, a friend and 2 girls, none of us elder than 9 years, performed “Crazy for you” live on stage on our final ceremony of our elementary school. Me on the keyboard, my friend on the drums and the 2 girls singing-under the imaginative name the rolling rocks. We practices months for that 4 minutes celebrating David’s musical masterpiece in front of our parents. But it was worth the effort. I still remember that day when I felt how it must be like if you are David Hasselhoff and joying up the masses.

Absolutely one of the highlights of my life. Which would bring me to another highlight (well, I think that is THE highlight of my life) but we will tell you more about that moment later in this blog. My brother knows which moment I am talking about, he actually took part in this moment without being there but I could manage that he could at least participate on this magic occasion last year in Vienna. I hope I did not get off the track to much when writing about Knight Rider but I think you all know by now which feeling caused KITT inside me and millions of others. Thank you bro for giving vent to my feelings. And I am sure the Hoff is going to want meeting you! Don’t hassel the Hoff.

Hoff spirit meet the hoff merchandise mission pillow unity who am I
This website uses cookies. By clicking "Accept" you agree to cookies being used in accordance with our Data Protection policyAccept